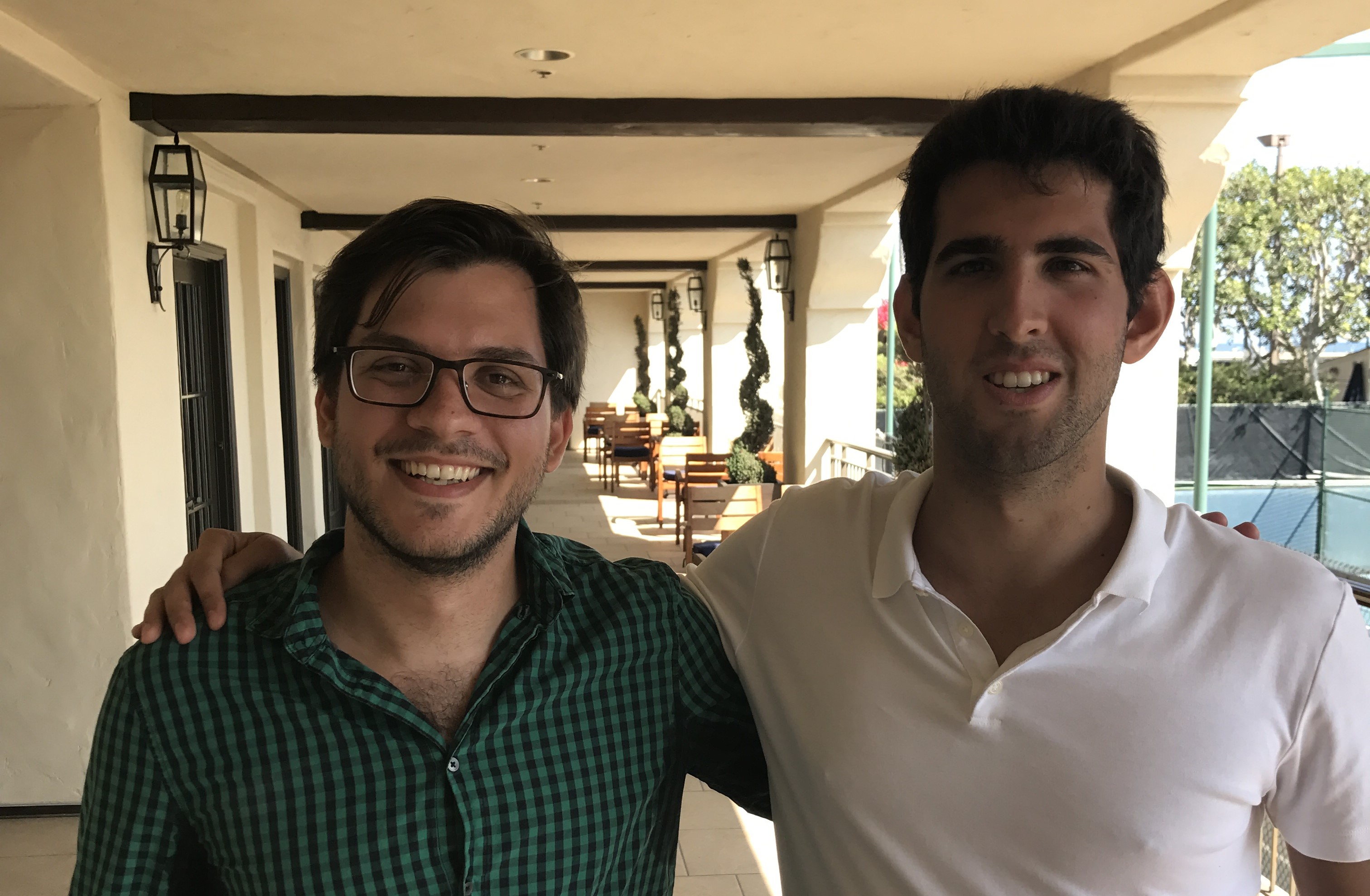 Today I spoke with Mariano Merchante, a second-year Master’s student at Penn studying Computer Graphics and Game Technology. We spoke about the games industry, the intersection of engineering and art, and his experience coming to the US after working in industry for four years in Argentina.

SB: Introduce yourself - tell us about who you are and what drives you.

MM: I’ve just finished my first year at Penn studying computer graphics. Before that, I earned a degree in software engineering in Argentina, and worked at a game studio for four years. I’m interesting in anything to do with graphics - artistic and technical.

SB: After working at a game studio, why come back to school, and why in the US?

MM: First, the mobile game industry is extremely saturated - there is a low barrier to entry and the market is very global. The quality bar of games on mobile app stores has been gradually declining due mainly in part to the business model they use. Everything is about making the most money possible - these games are turning more into casino-style experiences and less like traditional games. There’s nothing wrong with that - it’s just not what drives classical game devs.

It’s almost like slot machine-level mechanics dominate the space now - consider game styles like match-3, etc. That part of the job truly bored me, so I wanted to make a change.

It is considerably harder to move to the US from industry, and so I applied for and won a scholarship to study here. I thought, what could be better than studying what I love and at the same time learning more? I’m very grateful for the opportunity to study here and follow my passions.

SB: There may not be an answer to this question, but if you were to pick one thing that engineers and game studios in the US could learn from those in Argentina, and vice-versa, what would they be?

MM: To be honest, I think the two markets, working styles, and approaches are very similar. Of course, though, there are cultural differences. Many people and studios in Argentina have tried and struggled to make games tied directly to our culture, but those games often alienate a large majority of the possible player base. One time, another team came to our studio, and asked us why all of our materials were in English. They were astonished - asking why in the world we would make a game in English while in Argentina. We simply told them that there is no way to get enough traction in the market without working in English.

SB: You said the market was over saturated in mobile, and that the saturation was due to repetition of the same model. In console, PC, and AAA, many of the most financially successful games lack the same attention to detail and artistic flare that indie games, say Monument Valley, showcase. Do you think it’s possible to have it both ways? To have an artistically inspiring AAA game? Why does that not happen?

MM: That’s a great question - and something that all developers want. We as consumers of gaming products are not very good at evaluating what would be fun, and what specifically we want. You may think “I want an MMO with aliens and vampires and zombies, etc.”, and that freedom would be amazing, but the game would probably be shit due simply to a lack of coherence.

Sometimes, the constraints are what make games so interesting. Monument Valley wouldn’t be the same game had ustwo studios had the same financial support as EA or Activision.

In the end, players just want something fun. We as developers are very biased in this, and quite frankly, the numbers speak for themselves. As a developer I think gameplay should obviously come first, but that good gameplay can rely on artistic components. However, consumers seem to have different desires. These AAA studios have enormous amounts of money for market research - and they are catering to exactly what gamers want. The markets for art driven games are niche - and I think the AAA studios leave those markets to smaller studios specifically because they can better address those markets. There can only really be 1-10 of those truly astonishing, indie-driven games for every couple of years.

At the end of the day, games are entertainment. Most of the time, when people play, they are tired and don’t really want to push their brains to play. That’s the mindset of a casual gamer - for the others, games with puzzles and those extremely tied to skill (consider PLAYERUNKNOWN’S BATTLEGROUNDS) the market is much smaller. I, for example, mostly play Overwatch specifically for fun, not for an intensive gaming experiences. I may set aside a Sunday to play a game like Dear Esther, though - because if you want to have fun in that game, you really need to think about what you’re experiencing.

SB: As a follow-up, since VR seems to be driving games, do you think the art will drive games more than on traditional media?

MM: Actually, no. I think that responsiveness and environmental interaction will be key. Think about Minecraft, that interaction medium was so unique that consumers completely ignored the lack of competitive visual fidelity. I think successful VR games will follow the same strategy.

More than anything else, these new games will need to be coherent. They need to have a consistent world that the user will feel truly immersed in.

Especially in VR, the player really needs to believe that they are in a different world - a different reality. That transportation of environment will be what drives the games.

SB: I’m going to completely pivot here. As we began to speak about coherence, all I could think about was the recent Mass Effect: Andromeda fiasco - rarely do you see a AAA studio have such a huge problem upon release of a game five years in development. What do you think was the cause?

MM: Actually I think it is the opposite - think about what happened to Destiny upon its initial release. Diablo also had the same problem. In fact the Destiny team had to ask the Diablo team how to fix their own game (thank you Activision for buying Blizzard).

For ME: Andromeda, the team simply couldn’t maange their scope. Consider the facial animations - it was obvious that the developers had major problems because nobody would have approved how bad they were.

BioWare essentially got punished to trying to explore and innovate. They tried to play the “procedural” card, and failed.

From what we hear and can discern, the studio ran into a major problem where they didn’t correctly evaluate how much procedural world generation would make the scope of their project explode.

That said, I do think that proceduralism is the future of games. BioWare’s problem was endemic to adapting the enormous pipeline of contractors, freelancers, staff, and managers to a procedural ecosystem. If they can adapt that pipeline in the future with more success, there is huge potential.

The gameplay of Andromeda may have been simple (well, not that simple), but if the team really wanted to accomplish a truly open-world space exploration game, there would be no way to build every world, planet, and enemy by hand.

The trick will be to generate procedural content with the coherence of that created by humans.

I’m talking about more randomness than simple Perlin noise and random boxes - there has to be a way to emulate the creative process an artist goes through with a computer.

SB: That sounds like a machine learning problem, no?

MM: Unfortunately yes, and that is something that most game developers have little experience with. It’s also very hard to art direct.

If we could have a neural network generate procedural content in a AAA pipeline, for example, we could alleviate some of the production pressure that prevents these companies from innovating at their full potential.

Though No Man’s Sky was a technical marvel, someone needs to do this right in order for the technique to truly flourish.

SB: Speaking of procedural graphics, you made an insane technical demo of the world’s coolest Rubik’s Cube. Can you explain your process in coming up with that demo?

MM: Of course - the problem with proceduralism is that there is no magic formula to come up with an amazing project. It is really a feedback loop between you trying something and then tweaking it. In development, I do everything I can to make instant feedback possible while I’m building something, so that I can go back and experiment at will. You have a set of tools that you can use, knowing which tools are good for what situations, and you have to choose when to sue each one.

The most important thing is to not be afraid of doing something wrong, nor something technically incorrect.

For example, in my demo, the city generation works, but the buildings do not properly connect. But they still look pretty good, right? Don’t be afraid to fail, cut corners with math, or “cheat” on an algorithm. Just keep playing with whatever you’re making until you like it, and odds are it will turn out very well!